Tonight is the world premiere screening for Dennis Scholl’s new film “Lifeline: Clyfford Still.” Clyfford Still (1904-1980) was an American painter who was one of the leading figures in the first generation of Abstract Expressionists. Dennis Scholl is an award-winning documentary filmmaker who focuses on arts and culture, and produces films through his company Scholl Creative. Scroll down for more information on the film and to see the trailer … 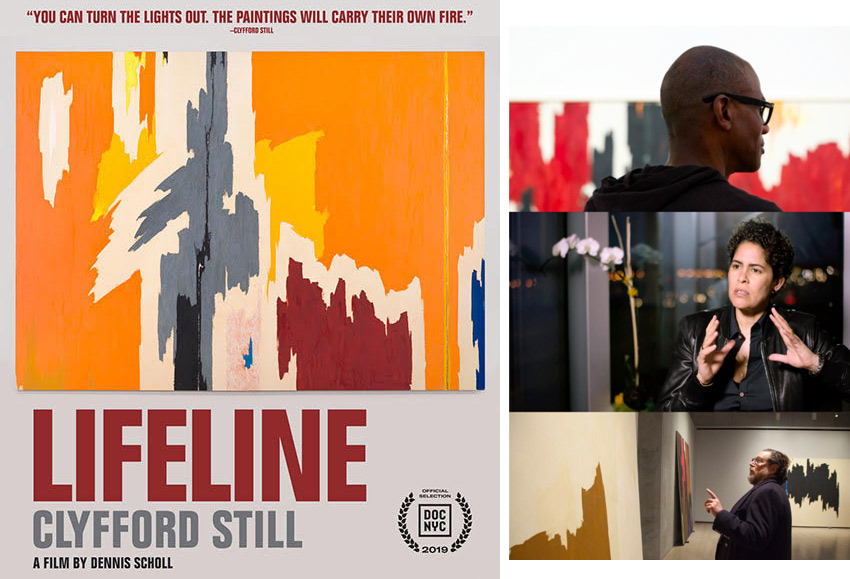 According to the promotional material for the film, Jackson Pollock once said, “(Still) makes the rest of us look academic,” Mark Rothko referred to Still as a “myth-maker,” and the art critic Clement Greenberg called him “a highly influential maverick and an independent genius.” It also states that “Clyfford Still, one of the strongest, most original contributors to abstract expressionism, walked away from the commercial art world at the height of his career.” I’d like to learn more about that, and I’m assuming the film helps explain that situation.

Scholl’s film includes archival materials as well as found footage and audio recorded by the artist himself. It also features the painter’s surviving daughters, painters Mark Bradford, Julie Mehretu, Julian Schnabel (pictured above right), SFMOMA director Neal Benezra, Clyfford Still museum director Dean Sobel, and a number of other subjects with insight on this artist. The film opens tonight at Cinépolis Chelsea on 23rd Street in Manhattan, and you can check out the trailer below.

Why our Flash Games had to be retired – The Artsology Blog

The Delightfully Debased Art of Nicole Eisenman and Keith Boadwee

landscapes by saad qureshi explore the meaning of ‘paradise’ at YSP

Why our Flash Games had to be retired – The Artsology...

The Delightfully Debased Art of Nicole Eisenman and Keith Boadwee