Eileen Sackman has strong convictions about the many species endangered by human indifference, and she hopes her art reflects a belief that “we can turn things around for not just the animals that live on the planet but everyone who inhabits it.”

Her latest works will be exhibited at the Beacon Artist Union (BAU) Gallery in a show titled Endangerment that opens on Second Saturday, Dec. 14, with a reception from 6 to 9 p.m. 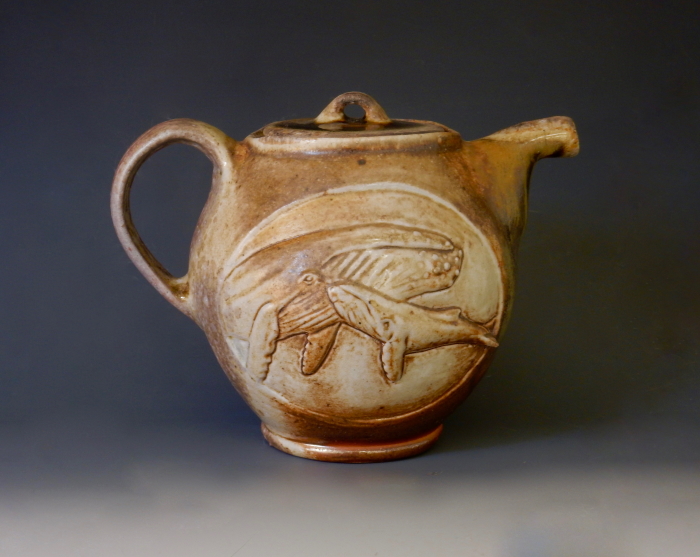 “It’s a lot to say that this show will bring awareness to every topic I’m passionate about, but I really want people to take a stand about poaching and hunting these animals,” she explains. She hopes her art evokes “a sense of family, relationship, sorrow, loneliness, abandonment, strength and power through the eyes of Asian and African mammals, as well as various whales.” 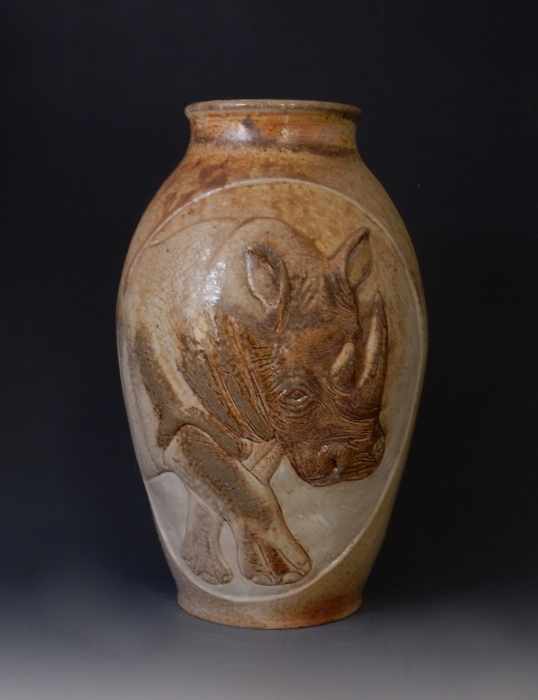 She continues: “I’ve had a connection to animals my whole life. In grad school, I did a lot of political work. I was upset about animals that had been used in traditional Chinese medicine. It was 2011 and people weren’t talking about it.”

For her show at BAU, she did sculpture and low-reliefs of endangered species such as African bush elephants, rhinos, whales, crocodiles and orangutans on functional pottery like teapots and vases.

“I feel like my sculptures and my pottery communicate,” Sackman says. “It’s about combining emotions, which comes through in how the animals interact with each other. A lot of the pieces will have a mother and child together. There’s a teapot with a male elephant on one side and a female elephant and her baby on the other. It’s displaying a deeper connection to the family unit, which we share.” 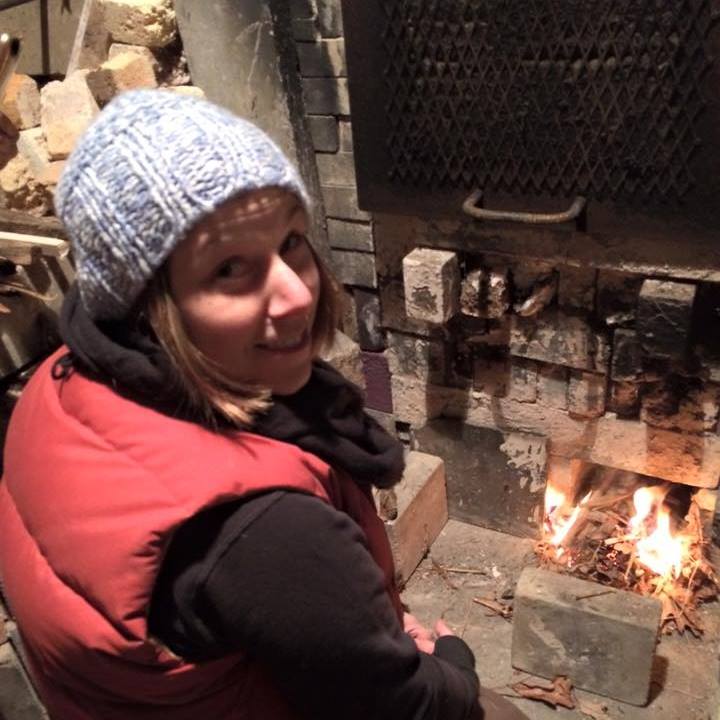 Eileen Sackman at the wood-fired kiln

Sackman, who has a master’s degree in studio art from Adelphi University and a master’s of fine art in ceramics from SUNY New Paltz, found herself drawn to Anagama tunnel kilns, which use wood as a fuel source. They originated in Asia in the fifth century but didn’t make their way to the U.S. until the 1970s and are still relatively scarce here. Wood ash is pulled through the kiln’s body, landing on the ceramic wares. As the temperature climbs, the ash begins to melt and fuse to the clay body, creating a natural glaze.

For past six years, Sackman has been wood-firing with Pennsylvania artist Jack Troy. Because the kilns are typically 15 feet long and require constant monitoring, “it’s much easier when you have a core group of people, working in shifts,” Sackman explains. “I go three times a year. We fire Jack’s small kiln twice a year for a five-day firing, and his big kiln once a year for seven days, then have to load and unload. A lot of the work that will be in this show I got out of the kiln just this past Sunday. You can make 100 pieces and a third of them come out the way you want them. It’s a practice in letting go, sometimes.”

Asked whether people tend to respond to what she produces as art, objects, or functional items, Sackman replies that if one of her mugs “becomes your go-to, to me that’s the best thing. I do a lot of arts shows and high-end crafts fairs with people who come back each year. If I hear, ‘My husband and I fight over it’, that’s the best news. I’m indirectly becoming part of your every day. If you’re going to think about the animal every time you look at it, they become part of it, too.”

The BAU Gallery, located at 506 Main St. in Beacon, is open Saturdays and Sundays from noon to 6 p.m., or by appointment. Call 845-440-8089. A portion of the proceeds from Endangerment will be donated to a South African rhino sanctuary.

Dragons and ogres and penguins, oh my!

Artist Donates 2,000 Books to Iraq Library Ravaged by IS Forces