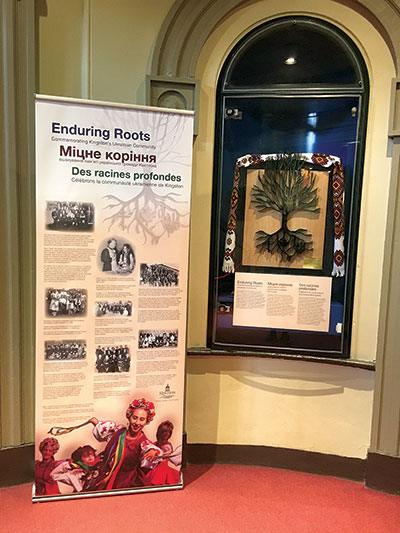 The sculpture “Enduring Roots” by Nick Leniuk with the accompanying banner highlighting the history of the Ukrainian community of Kingston, Ontario.

KINGSTON, Ontario – A stone sculpture by Nick Leniuk was unveiled at City Hall in Kingston, Ontario, on December 6, 2019, to honor the Ukrainians who made this city their home.

Titled “Enduring Roots” and commissioned by the Ukrainian Canadian Club of Kingston, the sculpture depicts an oak tree, whose strong roots are nourished by the Christian faith and national identity of the Ukrainians of Kingston, represented symbolically by a stylized cross, the Ukrainian tryzub (trident) and a Canadian maple leaf.

Mounted on an oak plank, the sculpture is bordered, yet not entirely contained within, a black wooden frame carved by an “enemy alien” during Canada’s first national internment operations of 1914-1920.

Complementing the sculpture, mounted inside one of City Hall’s architectural casements, is a banner reminding passers-by of the history of Kingston’s Ukrainian community.

Placed to commemorate the 50th anniversaries of the “Lviv, Ukraine” pavilion at the annual Folklore Festival and of the Ukrainian Maky Dance Ensemble, this sculpture will remain on display until May 2021.

Commenting on the unveiling, the club’s president, Prof. Lubomyr Luciuk, said: “Using as his model a real oak tree that my late father, Danylo, transplanted from the property of Mitch Andriesky, whose own father was one of the first Ukrainians to settle here, Nick Leniuk’s sculpture speaks to how our community put down deep and viable roots in Kingston, from those confined at Fort Henry during the first world war, to the immigrants who arrived in the interwar period and worked hard in the city’s industrial North End, to the political refugees who found asylum after the second world war and all those who have joined us since.”

He continued: “Despite their different immigrations and generations, they shared an abiding commitment to their Ukrainian culture and heritage, and not only endured but overcame the historic injustices they experienced, becoming proud Canadians while never forgetting where they came from or who they were. We are very pleased to highlight the many contributions our community has made over more than a century to the social, religious, educational and political life of our hometown of Kingston, Ontario.”

Martin and Short play for laughs

Richmond gets a new soaring statue, this one with dreadlocks

A Performance Artist Adapts to the Pandemic