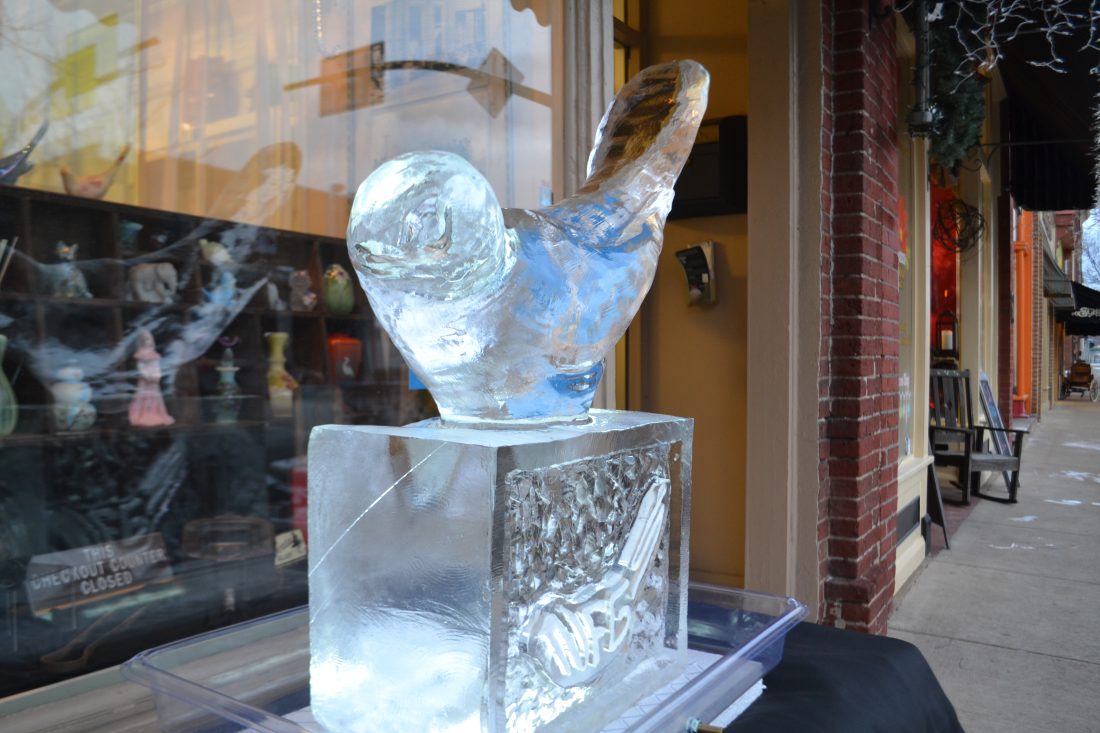 File photo
Tyson Whistler carves ice sculptures for many downtown businesses for the Fire and Ice Night during First Fridays.

File photo
Tyson Whistler carves ice sculptures for many downtown businesses for the Fire and Ice Night during First Fridays.

File photo
An ice sculpture was carved by Tyson Whistler for Busy Bee Restaurant in January 2019.

A local ice sculptor may not have known ice would be his medium, but he knew from an early age that art was one of his passions.

Tyson Whistler, 35, of Marietta, has been interested in art since he was 7.

“Coloring, painting, drawing…I’ve just been driven by my parents, friends and family, saying ‘hey, you’re really talented.’ Hearing that over and over again just makes you want to keep going,” he said.

Instead of getting video games for birthdays and Christmas, he would get art supplies and art lessons.

His sculpting started more than 15 years ago. He was a sous chef at the Lafayette Hotel when he was told they wanted to start doing ice sculptures for their weekly buffets. 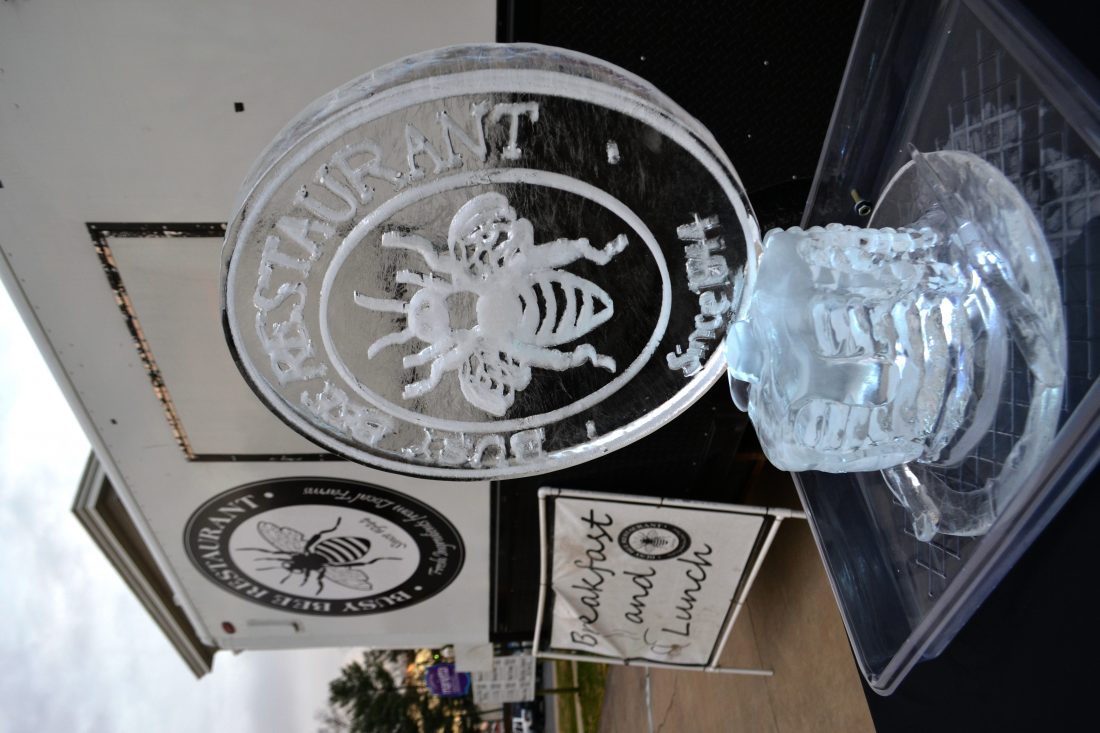 File photo
An ice sculpture was carved by Tyson Whistler for Busy Bee Restaurant in January 2019.

He and the chef started carving ice and after an hour or so, the chef laughed and said Whistler was better at it.

He practiced on his own, learning new techniques, as well as how the ice works so it doesn’t crack. After a while, people started showing interest and requesting his work. 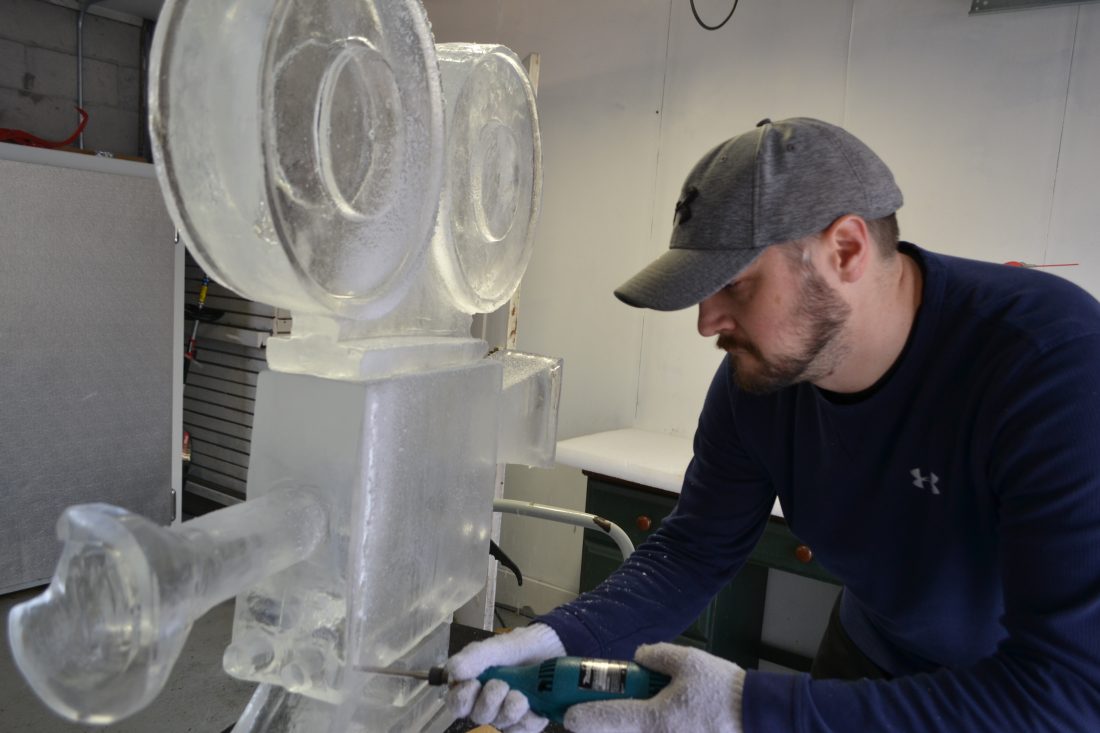 “I actually did a Facebook live of him last year,” said Tim Glover, Marietta Main Street board president. “I did about 10 minutes live and I’ll probably do that again this year.”

Glover said there were around 60 people watching Whistler work.

“He has high speed tools that he works with and the ice was just flying like crazy,” he added.

Whistler said he now has a carving time of around three hours, plus the prep time on the design and set up.

“A lot of the planning is never noticed,” he explained.

There have been a lot of changes in the way Whistler works on his pieces.

“I’ve probably been carving for 15-some years now, so you kind of tie in 15 years of breaking stuff and fixing stuff, and learning how to do this better than that,” he said, “Not to mention the tools went from a Lowe’s chainsaw and a set of wood chisels, to now I have $15,000 worth of ice block machine making materials, different freezers, multiple saws and grinding bits. I’ve learned the trade has been a lot easier to produce now that I have the proper tools and the knowledge to do it. It took many years to get to that level. So, yeah, now I can bust them out, a good strong piece, in three hours.”

One of his pieces of equipment is an ice freezer, where he can make his own blocks of ice. Each block weighs 300 pounds and takes 60 hours to make. Each block is 40 inches by 20 inches by 10 inches.

He also has a double door freezer where he stores pieces of the carvings he’s working on, as well as panels for upcoming projects.

But sometimes things go wrong and a piece will break.

“Ideally, you don’t want them to break. I usually never break them until I’m transporting them in some way. You re-freeze it, especially if you can, if it’s a clean crack,” Whistler explained. “Once they re-freeze, they are sticky like ice cubes in a glass, so you put them together, then shoot some water on it and let it re-freeze. If you need to fill in a larger gap, you can create like a slush and fill it in that way and grind it smooth. It is possible.”

He also has a freeze spray, so if he’s on location, he can put some water on the break and set it with the spray to speed up the freeze process.

Cristie Thomas, interim executive director of Marietta Main Street, said he has been heavily involved in their Fire and Ice-theme First Fridays since they began.

“His vision for what this event could be has really driven our goals. Not only is his creativity and talent on display through the carved sculptures, but his identity as a local — an active member of our community, an employee with a local company, a father raising his children here who attend area schools,” she said. “I think it is really profound, because it highlights the vibrancy of our local arts and culture scene. For me, it’s almost as if he is being a role model for the diversity of ways folks can contribute to strengthening our community and it proves how much skill really is here in Marietta.”

She said a common narrative is that southeast Ohio is often forgotten, but when you see how much the community comes together for events like First Fridays and how much talent is here, she thinks it really challenges that narrative.

Once the events are over, the carvings are left for people to enjoy until they melt away.

“The first two years it was awesome. It was like 3 degrees one night and like 2 or 4 degrees the next year, so they were up all weekend,” Whistler said. “A lot of businesses just left them up and it made the weekend really cool because people who didn’t make it out that night when it was cold, came out during the day when it was sunny and they got to see the ice. It’s neat to see them sparkle in the sunshine as well.”

The First Fridays event, which was originally scheduled for this Friday, was postponed until Jan. 10 due to the warmer weather. That will give Whistler a chance to think of an idea for his live sculpture for the event.

“Honestly, I haven’t decided yet. Last year, I knew exactly what I wanted to do. I saw this Loch Ness Monster design and I really wanted to recreate it,” he said. “I always use two blocks when I want to do something a little bit larger. I had an idea to do Snoopy sitting on top of his dog house, the iconic picture pose. I had an idea of some hands holding the globe, possibly. The third option was doing some kind of sea life mural. I’ve done that once or twice.”

He said every year, he wants to kick it up a notch and do something bigger and better.

“It’s got to be impressive, but also something you can carve,” he noted. “I start off with an idea and then try to figure out how to take that idea onto the ice. Usually I’ll print off some pictures that I find, sometimes I’ll do a drawing of something if I already know it. Put all those together to give me the right idea of how to transfer that into the shape.”

He said when he first started, his carvings were all cut out of the ice, such as a swan, but now, he has the ability and knowledge to fuse and recreate sculptures from different blocks of ice.

The most unusual thing he’s had to carve isn’t something you’d expect.

“Well, one time the client had a barbecue competition and a large part of the competition…it was a personal competition between a bunch of friends,”Whistler said. “He said ‘I make this barbecue and I really want to win this year and I really just want to wow them by this presentation. Can you make me an ice sculpture of a pig dressed like Elvis, holding his hand up so we can put this tray of ribs on top of his hand. So it’s an ice sculpture of a pig dressed like Elvis with the haircut and everything. That was probably the strangest request. I said ‘sure, if that’s what you want, I’ll try to make it happen.’”

His scupltures for First Friday’s have included everything from an intricate sternwheeler to a stack of pancakes, created for the Busy Bee diner.

Whistler said he hopes his opportunities to ice sculpt continues to grow.

“Hopefully this will become something big in the future and become another chapter in my story,” he said.

In pictures: Annual Sculpture by the Sea art exhibition in Sydney – Gulf News

A Goodbye to the Uncomfortable Holiday Work Party

The Living Legacy of the Kamoinge Workshop, a Force in Black...