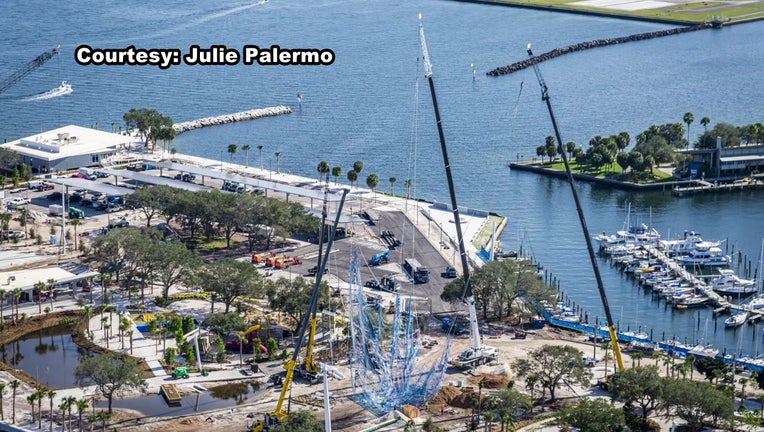 “I stopped because I saw the net going up. It’s a curiosity to me. Might as well stop and watch it go up,” said David Vana of St. Petersburg.

Thursday afternoon, dozens of people watched as workers started rigging up world-renowned artist Janet Echelman’s sculpture called “Bending Arc.” City officials said the sculpture costs the city about $1.3 million in infrastructure for the support beams, lights, and other items. The cost of the sculpture itself is about $1.2 million raised by private donations, officials said.

“We were trying to decide whether someone was in that basket on the long green arm,” said Gwen Mann, who stopped to watch the work from the sidewalk.

Hauled in with a crate, the twine used for the sculpture weighs 5,330 pounds, stretches to be 420 feet long and reaches 64 feet at its highest point, according to Echelman’s website.

“It’s nice that the sky seems to be the limit with what you can use,” said Mann.

Many locals who stopped to talk with FOX13 said they look forward to seeing it at its full scale.

“From the street, to the galleries, to the museums, to the studios and the arts district, it’s phenomenal and I think the pier is just going to add to the appeal of St. Petersburg,” said Vana.

Longtime residents remember what the old pier used to look like.

“It wasn’t pleasant at the end. And then when the restaurants closed and it was boarded up, you could still jog around there, walk around there,” said Bill Mann.

The progress is a big step toward the pier’s official opening in the spring.

City officials said the sculpture will take several weeks to finish installing. There’s a process called tensioning and relaxing that has to happen, and that allows the sculpture’s fibers to stretch slightly before the cables are tightened to the final place.

C4 rumoured to have commissioned ice sculpture of Johnson

Jackson at her flashy best, but Peas steal the show

Maine Art Hill and 2021 During COVID in Kennebunk, Maine