On Wednesday, December 25, at approximately 4:30 p.m., the beautiful ice menorah sculpture located on Church Street in Montclair, New Jersey, was vandalized, with all eight branches as well as the shamash broken off. A witness reportedly observed a juvenile, approximately 10 to 12 years of age, near the menorah at that time, and called the police an hour later.

“I just want to point out that we don’t know for sure what the motive behind this was,” noted Rabbi Yaacov Leaf, spiritual leader of Chabad of Montclair, during an interview with The Jewish Link. “We hope to get more information. I’m frustrated that police haven’t gotten surveillance footage yet. We want to know what happened. People are very triggered right now.”

Rabbi Leaf spoke about the community Chanukah event that had preceded the vandalism. “We had a beautiful menorah lighting last Sunday, on the first night of Chanukah. Every year we do it on a street corner. And now it’s grown; we get more and more people every year.  Why were we doing it like bandits on a corner? So this year I wanted to do something more,” he stated. 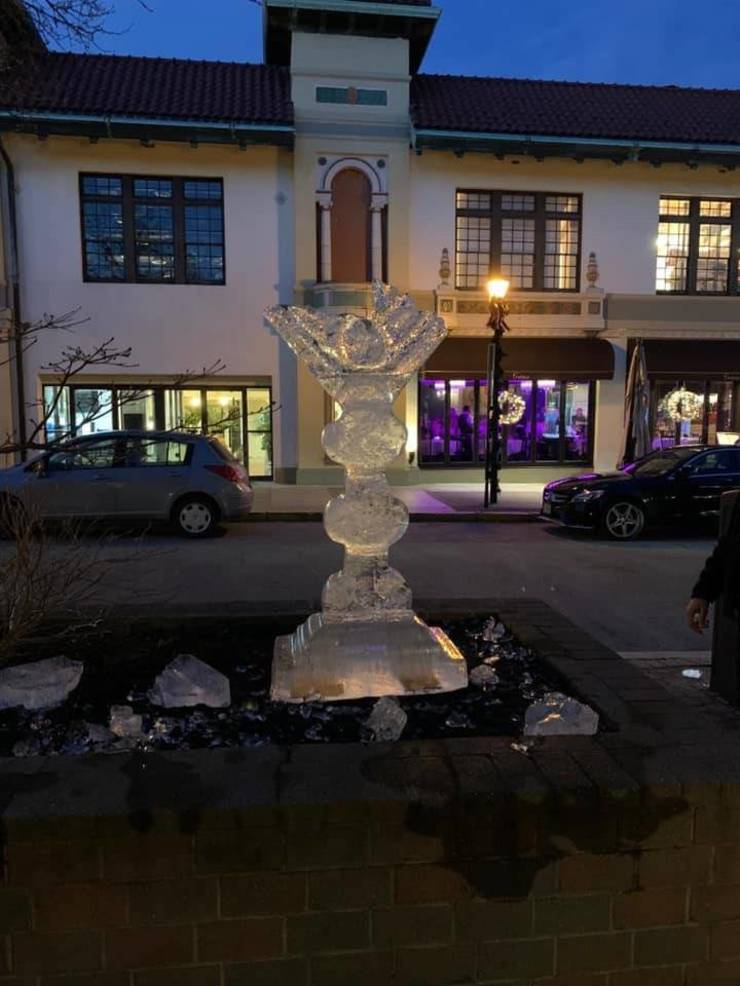 The rabbi continued, “The town approved it and issued a permit. They closed Church Street. I didn’t know what to expect, because many people were away, but it turned out to be a wildly successful event. Hundreds of people were there, Jewish and non-Jewish.”

The ice menorah sculpture was elevated in a planter that “you would have to climb up to reach the top,” Rabbi Leaf added.

On Wednesday evening, he received a call from the Montclair chief of police, Todd Conforti, informing him that the ic sculpture had been vandalized.

In light of recent confirmed acts of anti-Semitism that have plagued the Jewish commity, Rabbi Leaf initially waited for official determination of the motive behind the vandalism. However, he made the following statement, and posted photos, on his Facebook page prior to Shabbat:

“That was our beautiful menorah on Sunday eve. And this is the current state of the menorah…While I don’t know the motive behind this destructive act, I can’t help but think [about] the possibility of this being a biased incident. I sure hope not. At any rate, let’s light those menorahs and let our lights shine bright! I want to thank the MPD for their attention to this matter.”

In response to the vandalism, Chabad of Montclair hosted a second menorah lighting on Sunday, the eighth night of Chanukah. This lighting brought out rabbis from local and surrounding communities, community and non-community members, and many non-Jews, in an interfaith show of support and unity that was hundreds strong.

At the lighting, Rabbi Leaf spoke of the importance of unity over divisiveness as a path forward. “I want to thank you all from the bottom of my heart for coming out tonight and standing in solidarity with our fellow Jews. Each one of us is making a powerful statement that we will not allow hate and divisiveness to win…I hope the world is watching and emulating this.”

He continued, “An attack on any Jew, or any human being for that matter, is an attack on all of us and the values that we stand for. Tonight is ‪the eighth night‬ of Chanukah, a festive time for families and communities to come together and celebrate the victory of light over darkness, of freedom over oppression. Instead of joyously celebrating the last day of our festival, we are feeling fear and insecurity as increasingly we see that we are under siege by forces that threaten our lives and the values that we hold dear. We have watched with shock and dismay as multiple incidents of attacks, crimes of bias and hate, have ravaged the Jewish community throughout the week of Chanukah, as well as in the preceding months.”

“What are we to make of all this? How can we put an end to this hate that’s raging like a wildfire? The Lubavitcher Rebbe taught us that when confronted with darkness, our duty is to respond by increasing in light, one small deed at a time, because all of these small acts combined together will constitute a mighty force.”

“Just as these attacks constitute a radical manifestation of evil, representing “baseless hatred” that lacks a cause, so too, our response must come through a radical approach of “baseless love and kindness,” random acts of bestowing benevolence and compassion to others.”

“It starts right here, if each one of us can take the message of Chanukah to our families and communities, one by one, we will light up this world…There are two ways we can respond to these attacks. We can hide in our homes, under our beds, or we can loudly respond with more Jewish pride and observance, just like the Maccabees did.”

If this incident is, in fact, proven to have been anti-Semitic in nature, it will not be the first such incident in Montclair. Earlier this month, swastikas were discovered on desks in Montclair High School. A second incident involving a swastika at the high school occurred in November. Both were reported to Montclair police.

A third incident occurred during the fall, according to Rabbi Leaf. “A girl in the high school was wearing a Jewish star and another student shouted to her, more than once, ‘F-ing Jew!’”

At press time the Montclair police could not be reached for comment due to the holiday. No motive has yet been determined and no arrests have been made.

Inside the cocaine-fueled ARIA awards

Gen Zers in Russia Are Using TikTok as a Catchy Tool...