Decades ago, my parents primarily used 35mm slide film when taking photographs, and so most of the early family photographs were in slide format, and therefore rarely seen unless someone organized a slide show. About a year ago, my siblings and I decided to get all of the trays and trays of slides scanned and digitized, and there’s a lot of interesting images in there, beyond the standard posed family snapshots.

Here’s one that I just happened upon, and there’s clearly a story here, but I’m not sure I’ll ever know what it was, as my Dad most likely took the picture and he passed away several years ago. He used to have an encyclopedic visual knowledge of car models from the 1930s up through at least the 1960s, as American car manufacturers had specific design models that they rolled out each year. I’m sure he could have taken one look at this car, with the lines and the tail fin, and would have been able to tell me exactly what it was. I did a Google image search and think I might have ID’d it – it looks like a 1959 Chevrolet Impala – and it you’re a car expert and can confirm or deny this guess, please do so in the comments section below. 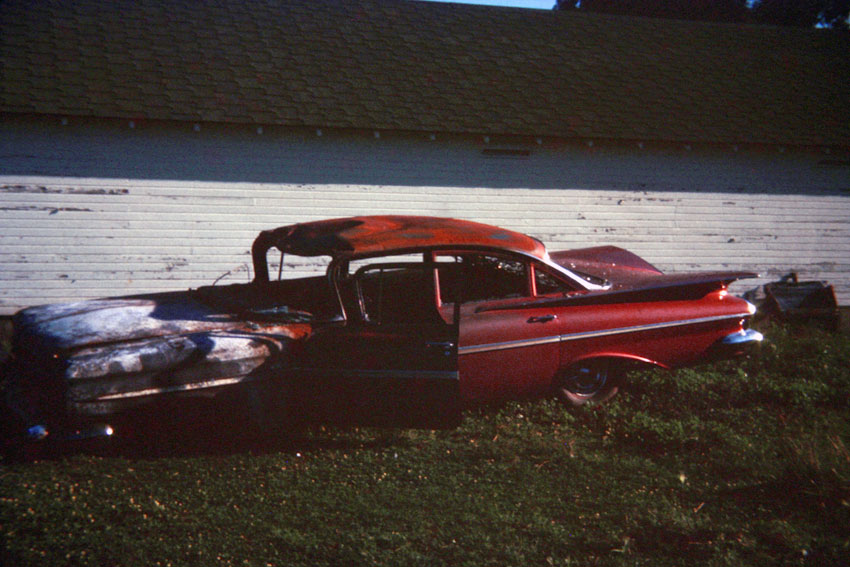 The next part of the mystery is, what happened here? The car looks like it had an engine fire, and was left sitting on the side of a farm building on my mom’s family farm in Iowa – with an approximate date of 1962-1963, based on the label of the slide tray. It’s odd that it would be left to sit there, but even more odd to me that the door was left open!

It made me think of some of Andy Warhol’s Car Crash paintings … check out our arts investigation of Andy Warhol and Ralph Nader’s campaign for car safety features here.

Devendra Banhart Exchanges Breath and Rhythm for Pencil and Ink

The call for entries is open for the Salisbury Sculpture Show

Devendra Banhart Exchanges Breath and Rhythm for Pencil and Ink