I received a press release about an exhibition of recent paintings by Laura Sharp Wilson that will open this Friday, February 21st, at McKenzie Fine Art in NYC. The exhibition, titled “Conversation with the Ground,” will be on view from February 21 – March 29, 2020.

I was previously not familiar with Wilson’s paintings, so it was interesting to read that “Wilson’s visual language has long been derived from the world of decorative arts, particularly by patterns and motifs in textiles, porcelain, and jewelry, as well as the actions of sewing and weaving.” In this exhibition, the theme of having a “conversation with the ground” obviously relates to the interaction between humans and our natural world, and the effect we have on a planet which can seem both fragile and resilient at the same time.

Below are two works from the current show: at left we have “Let it Grow in the Sky,” 2019, 18 1/2 x 12 1/4 inch acrylic on mulberry paper mounted on wood panel. There is a symbolic (I assume) chain underground which one might think could represent human damage to the earth, but the roots have grown through and the plants triumph as they expand upwards into the sky. At right we have “White Picket Fence,” 2019, 24 3/4 x 19 3/4 inch acrylic on mulberry paper mounted on wood panel. I like this one a lot for several reasons: one, the picket fence is somewhat abstract and doesn’t resemble a traditional picket fence, yet it clearly represents a barrier of sorts; and two, the idea of a fence as something that holds things in – or keeps things out – is defeated here by nature, which one can see is flourishing both under and in front of the fence as well as growing upwards behind it. 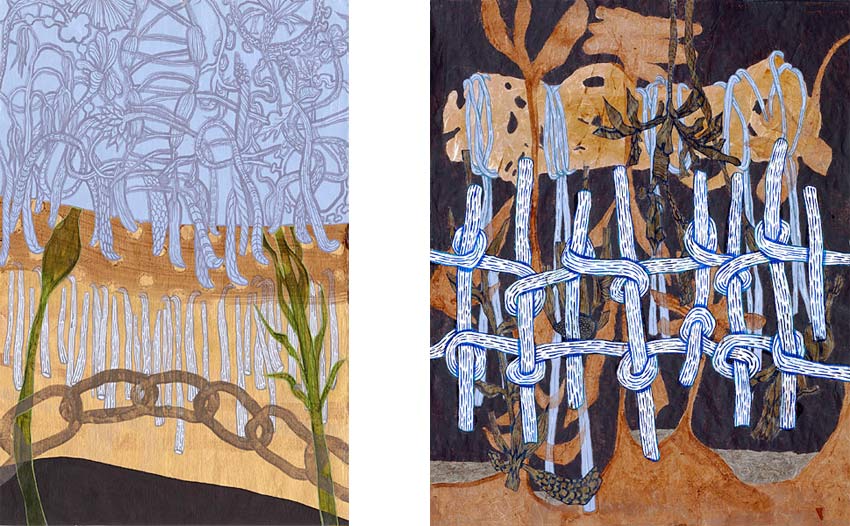 These are just two paintings from an exhibition that appears to have 16 total works, so we’re just scratching the surface (so to speak) of what will be on view – I hope to get a chance to see the show in person soon.

Laura Sharp Wilson (born 1965) received her BFA from Carnegie Mellon University in 1987, and her MFA from the University of North Carolina in 1996. To learn more about the artist, check out her Facebook page here.

The Sweetheart City opens its love locks for the 2020 Valentine’s season – Loveland...