Depictions of wildlife scenes made from cutlery appeal to the people of Sioux Falls — or at least to visitors of the Sioux Falls SculptureWalk.

For the second year in the row, SculptureWalk patrons who cast ballots in downtown Sioux Falls this year selected one of Ohio artist Gary Hovey’s pieces as the People’s Choice award winner.

Hovey’s piece called “Under Construction,” near 11th Street and Phillips Avenue, stands four feet high and depicts a beaver building a dam while a crane stands nearby. It’s made of knives, spoons, and forks.

The 2018 People’s Choice award winner, Hovey’s “Bear Lee Standing” was a bear made of stainless-steel dinner forks and knives.

Last year: The votes are in: Bear piece made of forks, knives earns SculptureWalk’s People’s Choice

“It’s an honor to be selected to exhibit in Sioux Falls and SculptureWalk, but it’s thrilling to be voted as the ‘People’s Choice,” Hovey said in a news release. “As an artist, you want your work to inspire interest and give people a reason to stop and enjoy your work, but to have them choose your work, with so many great sculptures and artists represented, it’s really an honor.”

As a part of the People’s Choice award, the city of Sioux Falls will purchase the sculpture and add it to its permanent collection.

SculptureWalk’s Director Jim Clark said recognizing the work of artists who participate in the annual exhibit and engaging with the people who enjoy the sculptures that line downtown streets ensures the success of the program in future years.

“We really are a city of sculpture and we’re committed to continuing that tradition in the future,” Clark said. 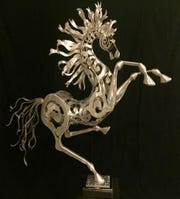 While Hovey’s sculptures inspire and entertain many, what people don’t know is his commitment to create great artwork while battling Parkinson’s Disease is even more inspiring. This chapter of his art career began ten years after the onset of Parkinson’s disease. “Since I can’t work a regular job anymore, making my art gives me purpose. I want my story to inspire others to look for what they can do despite what has happened to them.”

You can learn more about the artist here and watch a video of Gary, his work and his life here.

The SculptureWalk “Best of Show” award, selected by other sculpture artists with pieces in the exhibit, went to British Columbia, Canada artist Heather Wall for “Silver Belle.”

Highlights, and lowlights, from Private Sydney in 2019

The most interesting front yard in New Jersey – The Artsology...

Unusual architecture in Sugar Hill in Harlem – The Artsology Blog