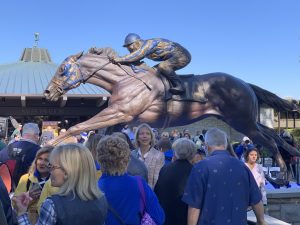 He was blowing through nostrils that drew the air in and out with a furious rhythm that propelled his legs toward the finish line of the 1973 Kentucky Derby. Secretariat winning

the race with Ron Turcotte riding is one of the sport’s indelible memories. Now the memory is captured for all time in a bronze monument, larger than life, unveiled Saturday at Keeneland.

A crowd of about 200 reacted approvingly when sculptor Jocelyn Russell and others drew back a drape checkered in blue and white – the pattern and colors of Secretariat’s ownership, Meadow Stable. The statue that emerged was so lifelike, so Secretariat and Turcotte, that the pair seemed eager to race again in real time.

The monument traveled from the foundry where it was cast, in Norman, Oklahoma, standing upright and secured by heavy straps on a flatbed trailer pulled by truck. On Monday the monument will be towed to its intended resting place, the center of a traffic roundabout in Lexington, Kentucky. City, state, and federal entities cooperated in constructing a park-like space and parking area nearby the monument; Triangle Foundation, an entity funded by private donations whose mission has been to beautify Lexington spaces, commissioned the bronze.

Secretariat’s race toward Kentucky began last Tuesday in Oklahoma where the sculpting has been in process for almost a year. Russell, the sculptor, began with a clay maquette 10 inches high, then another that was 29 inches in height, and finally, through computer calculations, to an exact replica in polyurethane foam cut to the heroic size of the completed work. Last December, she and her husband, Michael Dubail, were applying clay to the outsize exterior of the foam. The clay covered foam was to become the mold for the pouring of the bronze.

The resulting horse and rider weigh 3,800 pounds of hollow bronze. The monument stands 1 1/2 times the size that Secretariat and Turcotte stood when blazing a winning trail through the Triple Crown, the first winner of that trophy in a quarter-century following Citation in 1948.

Turcotte could not attend the unveiling, although he was invited. His brother, Gaetan Turcotte, read a message from Ron recognizing all those on the Secretariat team (most who are now deceased) and commenting that the monument is a “worthy testament to Secretariat’s greatness” and “symbolizes our run into history.” Turcotte reminisced in his message, citing “three different races and three different ways of running with the same result each time.

“We were a team,” he concluded in the statement his brother read.

The words were moving, said in the shadow of the outsize horse and rider bronzed from a memory nearly 50 years ago. Many in the crowd never saw Secretariat. They were pulled into this nostalgia for a horse perhaps by the 2010 movie, Secretariat that starred Diane Lane as Penny Chenery, daughter of Christopher Chenery who founded Meadow Stable.

Penny Chenery worked hard to ensure that the memory of Secretariat would remain a vivid, valued portion of the sport’s history. She surely succeeded. 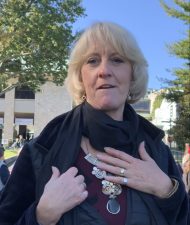 An annual Secretariat Festival, now in its 11th season, brings Secretariat fans together and was held through the weekend at Keeneland this year. Unveiling of the bronze was the high point of the festival.

It also was a high point in Russell’s career.

“I always wanted to sculpt a thoroughbred,” she said.

And to sculpt Secretariat? She could not have begun with a more appropriate horse. Russell is known for her outsize wildlife sculptures, such as a collection of animals she created for Audubon Zoo in New Orleans. She also sculpted the little mare known as Reckless, who assisted the U. S. Marines in the Korean War.

The obvious question for Russell upon arriving at Keeneland was how traffic reacted to Secretariat and Turcotte as the pair rode the Interstate highways from Oklahoma to Kentucky.

Russell told of vehicles rolling up alongside them, with drivers looking over to take photos with their phones. “Almost everybody that went by him had their camera out,” Russell said. “A few people honked. Her husband, Dubail, did most of the driving.

The only alarming moments occurred when they rolled over blemishes in the roads. “Wrinkles in the roads, the trailer gets bucking,” she said. But Secretariat, always the steady one, stayed on his feet.

Maryjean Wall is the former turf writer for The Lexington Herald-Leader. She retired from that publication following a career that spanned four decades and included three Eclipse Awards and an AP Sports Editors Award. She holds a Ph.D. in U. S. History, has taught history at University of Kentucky, and continues to write about horse racing as a free-lancer. She has been published in Sports Illustrated, Wall Street Journal, Forbes Life, Cincinnati, and Keeneland, among other publications. She has authored two books focused on horses and racing: How Kentucky Became Southern: a Tale of Outlaws, Horse Thieves, Gamblers, and Breeders; also, Madam Belle: Sex, Money, and Influence in a Southern Brothel. When she is not writing, she is photographing, always pursuing the creative muse.

Takashi Murakami & Pharrell Williams’ US$2.6 Million Sculpture is an Art of Extreme Extravagance...

In the Studio with Cathie Crawford

Art Basel Miami Beach is all online this year – The...